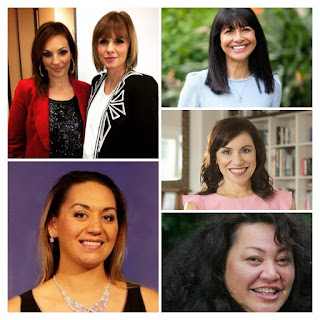 Carol Hirschfeld (Ngāti Porou) has over 35 years experience in news and current affairs.   She was a current affairs director/producer for some of TVNZ's leading shows such as Frontline and Assignment.  A presenter/reporter for Fair Go and co-presented Crimewatch.   But it was as a newsreader with John Campbell on TV3's 6.00pm that Carol became a household name in New Zealand.  In 2005 she produced Campbell Live the 7.00pm weekday current affairs programme.

But in one of NZ media's weirdest falls from grace Carol resigned over an early morning meeting with the then Broadcasting Minister Clare Curran when she reportedly lied over whether it was a planned meeting or a  'casual' coffee.

She is now Head of Video/Audio & Content Partnerships at Stuff.   For many of us it's a relief that this talented and valued Māori woman journalist with extensive media skills and experience was not lost to the industry.

Maramena Roderick (Te Arawa, Ngāti Whātua) studied journalism at Waiariki Institute of Technology in Rotorua, a bold experiment to get more Māori journalists.  Maramena was one of a group of young Māori who would change the face of journalism in New Zealand.   The course ran on and off for many years.  It saw a dramatic increase in Māori journalists but was closed in 2013 due to low enrolments.

Maramena was a former NZ Herald reporter then went to TVNZ where she had senior news and current affairs roles including working in Europe for four years.   She won numerous awards as an investigative reporter.  Maramena has also directed and produced programmes including the critically acclaimed Songs from the Inside and Behind the Brush.

In 2014 she became interim head of news and current affairs at Māori Television then Head.   It was reported in mainstream media that within a short time a number of Māori Television's leading reporters including presenter Julian Wilcox, Annabel Lee-Harris and Mihingarangi Forbes resigned.

I won't add conjecture as to what caused the departures and many were unrelated just to say that all of these people are dynamic talented individuals with strong opinions.   Maramena stayed with Māori Television and in that time the MTS newsroom won more awards in just four years than in its entire and prior ten year history.

Mihingarangi Forbes (Ngāti Paoa, Ngāti Maniapoto) resigned following controversy on a story about the Kohanga Reo (Māori language preschool movement)Trust.  It was explosive at a number of levels.   Mihingarangi's story questioned the integrity of an organisation and its board who are regarded as guardians of the Māori language and customs, and therefore sacrosanct in the Māori world.   The story focused on the doyenne of the movement and irregular use of a credit card.   There are allegations of interference from Māori Television management and definitely of Māori political pressure.

Mihingarangi moved to Radio NZ who would have found her pro-Māori opinions and stance confronting and challenging.   Then Mihingarangi teamed up with Annabelle Lee-Mathers to create The Hui a Māori current affairs show "to increase understanding and awareness among mainstream New Zealand about the issues facing Māori and the unique aspects of Māori culture".   Broadcast on TV3 it soon became the must see current affairs show of the week.

Maiki Sherman (Ngāpuhi, Te Arawa, Ngai Tūhoe) is another graduate from the Kohanga Reo (total immersion Māori language preschools) and educated through the Kura Kaupapa, the Māori language education system.  She gained a diploma in journalism from the Waiariki course in Rotorua and became the political reporter for Māori Television before transitioning to mainstream television at TV3's NewsHub and is now the political reporter for 1News.  Maiki is presently on maternity leave.

Stacey Morrison (nee Daniels) of Te Arawa and Ngai Tahu, has featured on NZ's television screen since she was a teenager from What Now? to Mai Time.  She works on mainstream radio.   Stacey is regarded as an expert in the Māori language and shares her passion with viewers, listeners and in regular classes.

I'm sure there are other Māori women in mainstream television who are doing amazing work.  Now what we need to do is move Māori women like these into positions of real power - not advisors or the one Māori on the Board to tick the brown box, but the CEO's, the Chairs of Boards, the decision makers.