Skip to main content
Posted by Kiwi On Screen December 03, 2019

Oriini is a well-known as a Māori language advocate and presenter and is a familiar face in the Māori media.   She credits another Māori woman presenter Miriama Kamo as encouraging her ambition.

For those of us Māori who have been part of the New Zealand television landscape her role is an remarkable statement.

In the early days of New Zealand television presenters were suppose to speak BBC Engish and had special lessons to help get rid of their colonial accents.   An early Māori presenter Marama Martin graced our screens in the earliest days of NZ television.  I swear her English was just as good as the Queen (of England).

It was a long wait to 2002 when Te Karere, TVNZ's Māori news, presenter Tini Molyneux moved to primetime news. She was virtually the only Māori reporter on mainstream news.   In 2015 TV3 weather girl Kanoa Lloyd admitted she was always surprised at the negative feedback from viewers over saying 'Kia ora' or referring to New Zealand as Aotearoa, the recognised Māori name for these islands.

Presenter Jenny-May Clarkson (nee Coffin) a well-known netball veteran and one-time vice-captain of the NZ Silver Ferns has made a journey to learn Māori and has incorporated the language into her work, although she copped more criticism for carrying on presenting while obviously pregnant.  Go figure!

Miriama Kamo has presented TVNZ's bilingual current affairs show Marae for many years now and in that time has been learning Māori which she uses while on screen.  Viewers, other Māori in particular, loved the fact that while not fluent like her co-host Scotty Morrison she was making an effort and including them on her language journey.And what of the rest of the presenters on mainstream television.  It's a strange thing.  TVNZ sits in the CBD of Auckland the largest Polynesian city in the world and increasingly a multi-ethnic metropolis.  But if you looked at the presenters on TVNZ until this year most of the female presenters were blond and over 98 percent of the presenters were Pākeha or of European descent.
Oriini Kaipara (Tūhoe, Ngāti Awa, Tūwharetoa, Te Arawa) is known as a Māori news journalist  and presenter for both TVNZ and Māori Television (MTS).

She's one of the new breed of New Zealand presenters - bilingual, articulate and well educated.  A graduate of the South Seas Film and Television school she was a reporter on TVNZ's Māori news programme Te Karere and the MTS flagship news Te Kaea.  Oriini was the award winning presenter/ reporter on Native Affairs, the MTS current affairs programme.

She is from the first generation of children raised through total immersion Māori language education from the preschool Kohanga Reo to Kura Kaupapa in Auckland.  She is a qualified translator, a student of Panekire, the Māori language school of excellence and has a business qualification.

A well known kapa haka exponent Oriini's performed on stage from childhood and is a member of one of the top haka teams in Aotearoa.  Articulate and erudite she's a sought after MC and speaker at events.    On top of all that she's a mother of four. 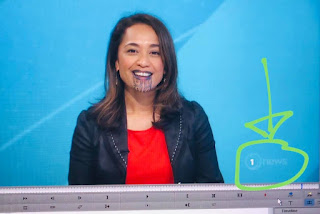 In 2016 Oriini took a DNA test for a television programme.  The results caused a furore on social media as it showed she was a 100% Māori.

Her reaction says a lot about her.  She says she was as surprised as everyone else as she knew she had two European ancestors but said in a Woman's Day article in June 2017 that despite the world wide reaction to the results the only opinions she worried about were those of her whānau(family) and children – and they thought it was cool.”

Her children wanted to take the test but Oriini simply told them, “You don’t need to. You’re as Maori as you feel.”