Skip to main content
Posted by Kiwi On Screen January 27, 2020

Haka is not only entertainment.  For Māori haka is story-telling of events, people, social concerns and politics presented and explored through music and drama.  Haka is born from the Māori  tradition and love of strong dramatic story.

Each bracket whether it is poi, haka, action songs, contains a unique story.   Topics as diverse as the land protests at Ihumatao in South Auckland to the appalling suicide rates of young Māori men, the removal of Māori babies from their mothers by Whānau Ora to the traditional role of the Rona, the moon woman and her effects on the cycles of life.

This week seventeen haka groups  took to the stage in Auckland in a fierce battle for five spots to represent the region in the national competitions at Te Matatini next year.  Last year Ngā Tūmanako won the coveted Matatini title of overall winner.   But every two years each group must prove their worth.

It is fiercely competitive and composers of the songs are not only masters of the Māori language but also highly valued story-tellers in the realm of traditional Māori performing arts.

Ngā Aho Whakaari the national organisation of the Māori screen industry, held a recent Tairāwhiti script writer's workshop in Gisborne, is seeking the same passion and powerful story-telling to mould into short films.

Facilitators filmmakers and writers Tearepa Kahi  and Kath Akuhata-Brown are on a mission to grow and support more Māori writers to encourage Māori to tell their stories with their own voices.

Tearepa is passionate about creating a space for Māori to write and to develop skills to write for the screen.  A successful film director and writer he says Māori writers are the key to the future of the Māori screen industry.

Despite the fact Māori films have a huge impact internationally and feature as eight of the top earning ten New Zealand films, Tearepa says Māori still are receiving crumbs.

While many changes have occurred in the New Zealand film industry he believes that Māori are still disadvantaged not only with small budgets but also with trying to satisfy the requirements of the existing funding institutes.

He is advocating for a Māori film commission to support and fund Māori films. 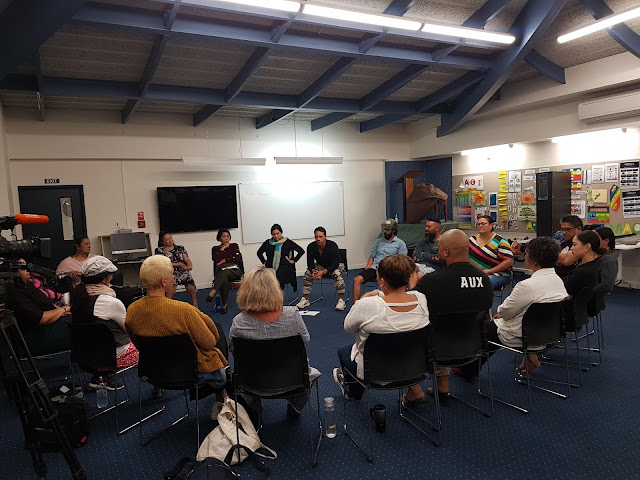 The workshop was based at Whirikoka Te Wānanga o Aotearoa in Gisborne, a tertiary institute built on Māori values and a passion to support people who may otherwise be denied further education.  Te Wānanaga o Aotearoa are found throughout New Zealand.

Tearepa says he can see workshops like this one run throughout the country alongside the Wānanga.

Kath Akuhata-Brown has extensive experience in writing for film and television and is often called to assess and work with script writers.  She took the group through an award winning short script film looking at the layout, voice and structure.  It was fascinating and allowed them to see and understand more about the techniques script writing.

Ngā Aho Whakaari Executive Director Erina Tamepo says scripts are the blueprint of any film and we need more Māori to write and to tell our stories from our perspective as Māori.  We also need more films in te reo Māori.   We need films that can replicate the drama and passion of our kapa haka in te reo Māori.    She says it is important that our language and our culture are reflected in our stories.

More script workshops are planned for 2020.

Author:  Hineani Melbourne works in the Māori screen industry and is presently the Chair/ Toihau of Ngā Aho whakaari.