Young Māori filmmakers are presently in Taiwan making films with Indigenous Taiwanese.   These rangatahi (youth) filmmakers are part of a project called "Through Our Lens" linking with other indigenous communities around the world.


The nine rangatahi from Aotearoa New Zealand are in a village in Taitung called Kasavakan for workshops creating their own stories on film.

Libby Hakaraia who is leading the team says they have been completely won over by the kaumātua(elders) who are in one of the films they have already shot on the second day of their visit.

Libby Hakaraia journalist, writer, director and producer is the driving force, with her partner Tainui Stephens a well-known film producer,  of the Māoriland Film Festival.   Founded in 2014 Māoriland is held in Ōtaki on the Kāpiti Coast and has grown from strength to strength celebrating, linking and attracting Indigenous filmmakers from around the world.

The Māoriland Charitable Trust works with young Māori from around the country giving them skills to make films from their own perspectives in the Through Our Lens programme.

Libby who is passionate about Indigenous filmmaking says in an interview with Radio NZ prior to leaving,  that they worked with these young people and saw them take to the cameras and gear.  She says they realised that no amount of passing on of theoretical experience seemed to be hitting any sort of mark.

"So we got out of the way and watched what they were doing.

“It dawned on us that a lot of our young people who are drawn towards storytelling have grown up in a digital world, so they know more than we do. We gave them the gear, took off the learning wheels and let them go.”

The group in Taiwan are working with the Indigenous Taiwanese to learn how other communities tell their stories.  They will spend eleven days there and create their own stories on film.

Libby Hakaraia explained in the interview that Taiwan’s indigenous communities know who Māori are and had maps on the wall that showed voyaging and connections between them and Māori.  She says there are even linguistic similarities.

“They were very much like us. We were going onto what were essentially marae and they were greeting us the way we would greet them if they were coming onto a marae in New Zealand.

“I think it’s wildly exciting for our young people to make those connections and make them in a way that’s sharing stories.”

It's not the first time a group has gone overseas.  Previously with some  UNESCO funding they sent
groups over to the Pacific to lead workshops with other indigenous youth.

In 2017 fourteen rangatahi film leaders were selected to travel to the Pacific.

Over five weeks, Through Our Lens worked with 47 youth, to create nine short films. These films tell stories of identity, the effects of colonisation and challenges they face from the perspective of the communities that they were born in.

The films they made featured at the Māoriland film festival.   Libby says the films attract a totally unique rangatahi audience.

When this present group returns, the next group will go to Helsinki, Finland and up into the Arctic Circle to work with the Saami.   Libby says while its a beautiful and surreal experience including a theatre carved out of ice, the young people on this part of the project are mainly from Northland, "the winterless North" so it will be a real experience for them.

Libby says in this age of communication the rangatahi Māori who go on these trips keep in touch with the people they meet over there. 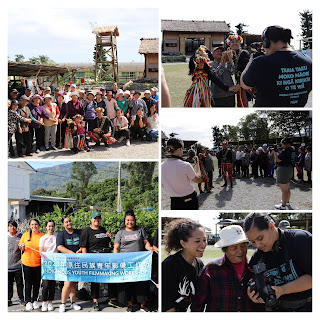