NZ On Air changing of the guard or is it? 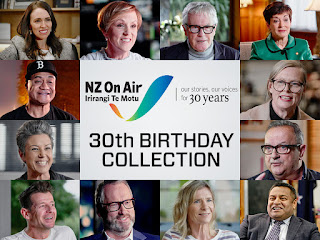 The world of broadcasting has been turned upside down and given a seismic shakeup since NZ on Air was formed 30 years ago.

In those days broadcasting in New Zealand (NZ) was based on the BBC model where the government poured money into one public broadcasting entity who then created content in-house pretty much as the managers saw fit.

But this was the revolutionary fourth Labour government in 1989.  At that time there was virtually no independent  private broadcasting industry.

Independent television made a grand entry; actually it was a rather messy and unnecessarily complicated and convoluted entry as politicians tinkered.

Suddenly NZ television went from the monopoly of TVNZ with TV1 and TV2 to TV3 and Sky Television
.
I won't go on about the lack of imagination in the naming of the channels, hell this is the country that calls one island North and the other South.  Naming is a far too serious business to be having frivolous names like Te Ika a Maui (The Fish of Maui) and Te Waipounamu (The Greenstone Land) - the names Māori call the two main islands.

TVNZ was still the public broadcaster under-written by the government, but now it had to make a profit.

TV3 operated as an independent free to air business while Sky Television charged for households to watch a range of channels.

NZ on Air's job was to pay for the programmes to be made.

Producers could now take their ideas to TVNZ or TV3 and if they got an agreement to broadcast the proposed programme or series or documentary then the producers applied to NZ on Air for the funds.

But NZ on Air had different ideas to the broadcasters.  They weren't a rubber stamp for TVNZ or any broadcaster.   NZ on Air was idealistic. It wanted to see more New Zealanders on air or in programmes, like more women, the physically disabled, Māori and other minorities.  The joke was if you had a Māori woman in a wheel-chair you'd get funding. Good laugh, never did see that programme.

It was a great clash which continues.  I think it created a vibrant, active and I must say creative independent broadcast industry.   True you now had to please both the broadcaster and the funder but at least the public, the viewers were given some options.

Creativity and new ideas if they got through the Commissioners flourished.

TVNZ  at the time had Koha.  Koha provided a window into Māori culture for mainstream New Zealanders.  It wasn't designed to tell Māori stories for Māori, something those who worked on the programme grappled with until it transformed into Marae, a programme that covered Māori issues from a Māori point of view.

Under pressure the government set up Te Māngai Pāho to support Māori aspirations and in doing so took a sizeable chunk of NZ on Air's money.   It's a scenario that Māori are still blamed for 25 years later.

NZ on Air concentrated on funding everything except Māori stuff.  It funded programmes with Māori content as long as it only had a small percent of Māori language.  Basically they weren't about the Māori language that was left to Te Māngai Pāho.

NZ On Air and now Te Māngai Pāho are unique, it doesn't exist anywhere else in the world but does it work?

While some of NZOA decisions are questionable, nothing is perfect.  The thing I love about NZOA is that they are willing to push the envelope, challenge the broadcasters and make things happen.  This can be seen recently with the support of online content.

The broadcasters are no longer the only arbitrators of what gets produced and what doesn't.

But NZ on Air faces challenges of its own.   For a start in its 30 years of existence I know of only two Māori who have worked at NZ on Air and one was the PA to the Executive Director.

NZ on Air does bring in Māori advisors or assessors or even a Kaitiaki (Guardian) - it's the old story for Māori in the screen industry, ever the advisor never the decision maker.

Ngā Aho Whakaari and others questioned some of the "Rautaki" decisions.

Ngā Aho Whakaari the Māori screen representative pointed out that this wasn't good enough.   A few rules were needed as to what qualified as a Rautaki production.

For a start there had to be at least two key Māori creatives.  The key creative roles are the Producer, the Director and the Writer or Researcher.

The Producer or more likely the production house holds the copyright of the programme or series.  All good except today most of the Rautaki funding is going to the major production houses.

Most of NZ's major production houses today are international companies.  So the copyright for "their" productions are now held by offshore companies.  For Māori this is a major problem.

NZ on Air's present stance is that this is not their problem.  So whose problem is it?

Does NZ need a system or a "rule" that any crown funded productions must have the copyright held in NZ?  This issue still needs to be addressed.

It is an insult and smacks of patronising paternalism.  Sixty years after television arrived in New Zealand it is still a reality.

This week it was announced that CEO of NZOA after 12 years at the helm Jane Wrightson is stepping down.  She will be missed.  I enjoyed her robust discussions, her take on things even when I disagreed and god she was impetuous and stubborn but never boring.

Jane navigated NZ on Air through challenging times, especially with no increase in funding for nine years, but still pushed boundaries.

Who will take her place?  Who will be the navigator in the turbulent seas of the new broadcasting ocean with currents of change swirling to our shores with undertows, rogue icebergs, global warming, with the knowledge that there are more unseen and  unknown hazards ahead?

As a Māori I'd like a Māori at the helm one with vision, drive and passion.  But given the calibre and politics surrounding recent appointments it would be a miracle to even get a Māori in the house.

The NZ broadcasting landscape has changed almost beyond recognition in the last 30 years.   The industry today including Māori reflect the proverb of Polynesian navigators who sailed throughout the Pacific for millennium.

(Seek out the distant horizons but cherish what you have.)

Author:  Hineani Melbourne is an award winning writer, director and producer.  Hineani is also the present Toihau/Chair of Ngā Aho Whakaari who represent Māori in screen.  This is her personal opinion and perspective.